MBA Students Still Choosing To Study In The UK Despite Brexit

In the immediate wake of the Brexit vote in summer 2016, it was unclear what the impact would be for business schools in the UK. Some speculated that interest from applicants would take a critical hit, as they rushed to secure MBA places in countries with more fixed relations to the rest of the world.

However, in practice, the opposite has been true.

According to December 2018 survey by the Graduate Management Admission Council (GMAC), the share of candidates who say that the UK is their first-choice destination has increased, and over half of business school applicants to the UK say that Brexit has no impact on their decision.

For Matt Strock, a current MBA at the University of Bath School of Management, Brexit was not a deterrent in the slightest. In fact, coming from a background in education in the USA, he says he saw it as more of an opportunity.

“I saw Brexit as an opportunity”

“There have been a lot of shifts in education globally,” Matt explains. “I honestly did not consider Brexit as having a negative impact—I saw it as somewhat of an opportunity for me to get a foot in the door [in the UK].”

Making big strides in his career was key for Matt, as he hopes to one day set up his own education consultancy. Bath is well-ranked for career progress on the MBA by the Financial Times, and combined with their focus on practical learning, it beat out schools in the USA for Matt’s application.

“I have an older brother that got an MBA at a really good school in the US, and I remember talking to him about it and he said he didn’t really remember anything from it—when I decided to get an MBA, I wanted to make sure that I would walk away with a lot of knowledge,” Matt recalls.

Part of this was finding a project-based MBA that would take him outside the bounds of the classroom and give him exposure to businesses. At Bath School of Management, this is achieved through the multi-project suite at the end of the MBA, in which students complete five different practical projects rather than a single research paper.

“It gave me a different perspective”

This was key for Matt, and in fact, a highlight of the MBA for him was the Change in Action program, which gives students a crash course in change management as part of the project suite.

Learning about change in the environment of Brexit negotiations was illuminating, and worlds away from the experience he might have had in the US.

“It definitely gave me a different perspective,” Matt agrees. “I see things differently here in a lot of good ways.

“In the US, each state is separated by their own government, whereas in the UK [decisions are made] nationally; I’ve had the opportunity to network more and even meet the strategic head of education in the government—I would never have had that chance back in the United States.”

A self-described ‘petrolhead’, Fizaan has worked in the automotive industry in the UAE, India, and Saudi Arabia for years, and wanted to accelerate his career with a one-year MBA from a reputable school. He says that Bath has given him exposure to industry disruption that will be invaluable in the next stage of his career.

“The MBA doesn’t just focus on classroom projects, but also going out and working with an actual consultancy,” he says. “That really helps, and it’s one of the very good things I’ve left Bath with.”

Like 75% of the applicants surveyed by GMAC, Fizaan was drawn to the UK by the international reputation of its business schools, and Bath School of Management stood out from the pack.

“The alumni from Bath always give very positive feedback about the university, the city, and the professors—it has a personal touch, and speaks to the lifetime of connections you have,” he says.

Now, with his graduation on the horizon, Fizaan has joined their ranks.

“The best part of the MBA has been the whole package altogether,” he enthuses.

“The city, the campus, my cohort, my professors—it’s one of the best experiences, and I’m not the only one who would say that, I’m sure my colleagues would say that, too.” 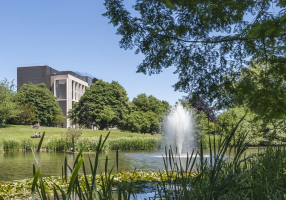