3 Successful Women Who Left McKinsey, And Bain For Business School 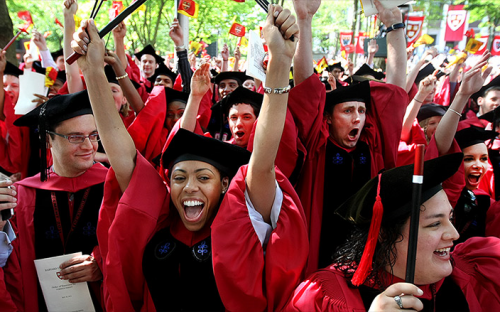 Despite progress, there remains a glass ceiling for women in business. In the S&P 500, 4% of chief executives are women. In the Footsie, 6% of chiefs are female.

And if the recent storm engulfing advertising giant Saatchi & Saatchi, after its chairman Kevin Roberts belittled the importance of gender issues, is anything to go by, we’re a very long way from redressing the divide.

To help crack the invisible barrier, business schools are on a diversity drive. Last year for instance, Harvard Business School launched the Gender Initiative, to further the advancement of female leaders. Business schools can be springboards for women to reach the top, believes Judy Olian, dean of UCLA Anderson School of Management: “We get women at the starting line for upward mobility,” she says.

Half of female Fortune 500 CEOs have MBAs, according to the Forté Foundation, a consortium seeking to advance women in business.

She views the MBA as a stepping stone to higher management positions and a way of closing the gender gap in the higher ranks of business: “There just aren’t enough women,” she says.

The greatest benefit of the MBA, Elsa says, is the network — there are 70,000 alumni in the HBS community and the school has 80 alumni clubs and associations.

This is a boon for female entrepreneurs, Elsa notes, who have long faced headwinds: Men are 60% more likely to get funding than women, according to a study published by MIT, Harvard and Wharton.

“There aren’t enough women in venture capital and there aren’t enough female founders who successfully raise from VCs,” says Elsa, who launched Agora, a tech start-up. But, by “having more support and mentorship and just giving feedback, we can help each other out”.

She says: “I was ready for a career change…For women in particular, an MBA is something that adds a lot to your résumé and body of learning.” Lilly used her Wharton MBA to land a job at e-commerce giant Amazon; she’s a senior marketing manager for Prime Video.

Lilly has benefitted from Wharton’s diversity — the Class of 2017 is comprised of 43% women. “Business schools are definitely awesome at trying to involve more women.”

Lilly says more women should get an MBA, which she believes could help achieve greater gender diversity in business: “There are still industries which are male-dominated. It’s something women should be aware of, so they’re not blind-sighted. And business school is a good place to open your eyes.”

“I saw the MBA as something that transforms you into a leader with rich business insights and the ability to manage team dynamics and diversity,” she says of the choice to leave Bain & Co.

Neda believes an MBA can give women the freedom to broaden their career options, “which comes especially handy at a stage where women would like to combine professional and family commitments”.

“It is the perfect environment to experiment and get acquainted to career paths that may be clouded in pre-conceptions, such as a poor lifestyle, or male-domination,” Neda says.

She adds: “Moreover, ladies pursuing an MBA play the role of inspiring trend-setters for younger generations of women. Their experiences and successes widen the playing-field for other women.”