Best MBA Jobs: How My MBA Helped Me Switch From A Career At IBM To Manager At World-Leading Brewery

Many MBA candidates are attracted by the bright lights of business school in hopes of switching sectors or gaining access to a career they could only dream of before.

IPADE Business School MBA grad Bernardo Aramburu has achieved just that. Leveraging his MBA in Mexico, he’s successfully made the career switch from a financial analyst role at IBM to a general management position at Grupo Modelo—a leading Latin American brewery company that exports brands such as Corona and Modelo.

We caught up with Bernardo to hear about he’s used his MBA to launch a thriving managerial career.

Choosing an MBA in Mexico

Before his MBA, Mexico-born Bernardo had built a successful career as a financial analyst at top tech companies such as IBM and worked in pricing and taxes at Toshiba Global Commerce Services in Mexico City.

His ambitions didn’t stop there, however, and after a chat with his career mentor—a chief financial officer (CFO) of a large tech company—Bernardo decided it was time to venture into a new business field.

“I realized it was time to stop just being ‘the finance guy’ and become more of a general manager,” he says.

“After finishing an undergraduate degree, the idea is to work as fast as possible—it’s not as common to take a pause and consider what would help you make more steps in your career,” Bernardo continues.

This is when he began his research into full-time MBA programs. IPADE Business School in Mexico had always been on his mind, and he realized this was his chance to gain a business degree there after receiving an MBA recommendation letter from his career mentor.

“It was great that I could get to stay in Mexico City while studying for my MBA—this was a huge priority for me.”

Learning about new business industries in the MBA

One of Bernardo’s main motivations for joining an MBA program was to gain exposure into new business industries and increase his skill set.

The 22-month IPADE MBA program emphasizes the case method model of teaching, whereby students take on the role of general manager or CFO in real-world business cases to debate an outcome and strategize on an issue.

“It was amazing to apply your own vision and experience into these decisions and defend your position in front of a 70-person class,” Bernardo says.

The fact that MBA students bring their own understanding and experiences of business problems to the table helps broaden classroom discussions.

The most recent IPADE Business School MBA cohort is comprised of 40% women and 27% international students.

“Making decisions is a habit you need to work on every day. IPADE helped me learn the right arguments for the right moment.”

Developing his business knowledge even further, Bernardo also joined the Social Responsibility Club and Consulting Club at IPADE, gaining vital networking skills he could take into his future.

Leaping from a finance career to management at Grupo Modelo

From his experiences on the IPADE MBA, Bernardo began to gain a clear perspective on his interests and goals.

“I knew I was looking for a company that connected with me on a personal level,” he says.

The IPADE MBA hosts regular recruiter events with top companies based in Latin America, which is where MBA students can put their networking skills to the test.

In fact, Bernardo landed his role at leading Mexican brewery Grupo Modelo after speaking with the company at one of IPADE’s recruiter events.

“The business school helped me create my trademark and develop a clear brand of what I bring to the table, which is what drives me forward,” he says.

Bernardo has since worked his way up the company where he now holds the position of general manager at Grupo Modelo, overseeing the distribution process in two different states in Mexico.

He’s moved from a strictly finance and sales-oriented role to one that focuses on business strategy, direction, and overseeing general management practices.

“This is a position where I see my MBA working at its best,” he says, “one of the main learnings I gained at IPADE was how to center individuals in your decisions—this humanistic approach is something I’ll forever carry into my MBA career.”

Next Read: 6 Reasons To Study In Mexico For Your MBA 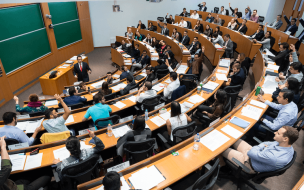 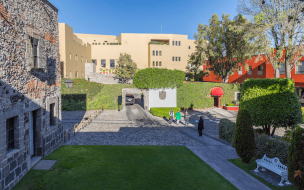