A team of five recent MBA graduates from the University of Hong Kong (HKU) have just launched Farmacy HK, a smart city, urban farming concept based on cutting-edge hydroponic technology.

The first concept city farm opened in Hong Kong’s Causeway Bay in February this year. Over 100 species of organic food products—rare herbs and edible flowers—are grown in a controlled environment without soil, using mineral nutrient solutions dissolved in water instead.

Farmacy HK—fully operational since early April—is already selling its produce to two restaurants in Hong Kong and is exploring B2C opportunities with retailers online. The team expect to sell out the entire farm’s produce in just six months’ time.

Woody Chen, an HKU MBA alumnus, worked for his family’s construction business in his native Taiwan prior to his MBA. His interest in urban agriculture piqued after reading an article about a former Sony Corporation semiconductor factory in Japan that had been transformed into the world’s largest hydroponic farm.

Living in Hong Kong during his MBA, Woody found that he couldn’t buy the high quality, fresh vegetables he was used to in the local supermarkets. Taiwan is well-known for its agriculture but in Hong Kong there’s no land for farming; most food is imported.

Woody decided to put his nascent startup idea into action. He enrolled in the HKU MBA’s famed Business Lab, an elective course which takes students through every step of the startup process, from idea conception to launch.

“I wanted to put what I’d learned during the MBA into practice,” Woody explains, “to use the Business Lab to come up with an idea that fits Hong Kong, is good for society, and harnesses technology as well.”

At the start of the Business Lab, Woody got up on stage and pitched his idea to his MBA classmates. So, the Farmacy HK team was born.

“The Business Lab ran to a very tight schedule,” Woody continues. “Every week, you had a deliverable to submit. But there’s no formula of how to design your business. You get guidance and there’s a blank canvas—at the end of the day it’s up to you.

“Pedro brought in a lot of professionals from different backgrounds like finance and marketing, so you learn a lot from that cross-industry knowledge.”

Sanford, an alumnus from HKU’s engineering school, agrees: “We’re still leveraging a lot of the network from the Business Lab now,” he says. “The whole Business Lab experience is a preparation for real-life. You talk a lot about practical things—recruiting, managing stakeholders, managing peoples’ expectations—things that aren’t taught in a normal business school.”

The team are doing a lot of work around public perception and education, selling hydroponic farm experiences and culinary workshops. Sanford says they’ve had plenty of interest, not just from consumers, but government entities, schools, hotels, and local industry in Hong Kong.

Next, the team want to transform their first farm into a fully-automated Internet of Things (IoT) system and gather data on plant growing techniques, stored on a blockchain. They want to expand into Macau, Shanghai, and Shenzhen too.

“We’ve been evolving ever since we completed the Business Lab and turned into a startup,” says Raymond, who worked in consulting for PwC for six years prior to his MBA.

“Farmacy HK can do a lot of things. The first stage is growing rare edible flowers to really justify our qualities. But the two major problems we want to address long-term are carbon footprint and food safety, using our high quality growing techniques.

“We’re going to develop the IoT and agricultural technology—agtech—to penetrate communities and homes, and make farming accessible in the heart of the city.”

Would the team be where they are today without the University of Hong Kong? Raymond doesn’t think so. “I didn’t even think about starting my own business when I applied for the MBA,” he says.

“For a startup, more than ideas, you need people who have the skills you don’t have and the strengths that can supplement your weaknesses—that’s what an MBA gives you.”

Woody agrees: “The HKU MBA program put together a lot of smart and talented people that speak a common language,” he says. “Not everybody is Mark Zuckerberg—you can’t just design something from your garage and be successful. You have to rely on and work with others.” 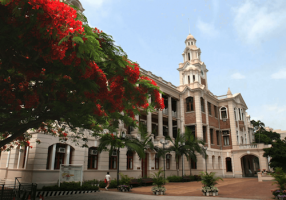