You don’t need to be a leaking adrenal gland to be a good leader, says Malcolm Norman

Malcolm Norman enjoyed a long and successful military career before an MBA at Cranfield School of Management propelled him into the corporate world and to his present role as global chief security officer at AON, the insurance and consultancy group.

For MBAs looking to understand the concept of leadership and enhance their skills, there are few better examples of leadership profiles that Malcolm's.

Originally trained as a teacher at the University of Exeter, Malcolm joined the British army with the intention of taking a short, three-year service career. Over the next 20 years he would work his way up to a variety of leading roles in the forces, from platoon commander to senior executive at the Ministry of Defence.

His first deployment, only three days after passing out of Sandhurst (the British Army's initial officer training centre), was to Northern Ireland. This was followed by a number of campaigns in Bosnia, Macedonia, Yugoslavia, the Falklands and Iraq.

Where I meet Malcolm, in the glitzy modern offices of the AON centre in London’s Leadenhall building, known as "the cheesegrater", seems a world away from scenes of past disaster and war.

As CSO, Malcolm’s role is to protect AON’s people, its property, data and business operations.

Malcolm is early and comes prepared with several pages of notes. He greets me with a strong handshake and glows with the confident exuberance and firm efficiency of a military man ready to share his story.

How did your experience in the British Army prepare you for a leading role in business?

As an officer in the army, leadership is your raison d’être; to lead young men and women to do extraordinary things in extremely difficult circumstances.

When I transitioned from the military there was this expectation that as an army officer, you order people and tell people what to do. That couldn’t be further from the truth.

My last deployment was in Iraq with an area of responsibility the size of Wales. In a military environment where you are responsible for up to 600 people, there’s no way that you are going to speak directly with your team on a daily basis; you can’t tell them what to do.

What is the biggest challenge you face as CSO at AON?

At the moment the most prevalent risk to any organization, particularly one that manages data, is the threat of cyber hacking.

You look at the criminal element as being large organized gangs around the world. [But] with TalkTalk (which was hacked in October, comprimising 157,000 of its customers' personal details), it’s a group of 15 to 20 year olds who’ve linked up around the UK.

We’re being attempted hacked every second. It’s an arms race. There’s a recognition that we are going to be breached. The key is to close the window of opportunity to a very small amount of time; to identify the hack, close the hack off, reinforce the protection and move on.

Why did you decide to leave the army and move into the corporate world?

There comes a point in your career where you have to take ownership of the next ten to fifteen years. I’d done what I’d wanted to do in the forces, I’d deployed to military operations at every rank and I’d commanded soldiers at every rank. I looked ahead and I didn’t see anything new.

There was a world beyond khaki that I wanted to explore and when I looked at the variety of options available, I was absolutely blown away. I would describe it as standing on a precipice, looking left and right and seeing no boundaries.

How did you profit from your experience studying for an MBA?

Cranfield was the pause I needed to establish what my goals were and how to take the next step in my career.

The MBA was a fabulous translator. It showed me that what I had experienced in the military was actually transferable to the civilian or corporate world.

What makes for a good leader?

What you need is for the people who are following you to trust your judgement and to see the strength of your conviction. You need to be able to provide that big arrow of direction, but you don’t need to be able to stand on the hill and shout, "follow me".

Leadership is about respect, and you’ve got to realize that it is hard earnt and very easily lost. You need resilience, enthusiasm and integrity to gain people’s trust.

I have a mantra which says every plan will fail. And it will! You can’t write down a plan from A to Z and expect it to follow in a successive way. Your skill as a leader is to provide the robustness that you are following the right path and to find alternative routes.

Is leadership a natural trait, or something that can be taught?

If I had an equation for how people develop, I believe it’s 70% experience and learning on the job, 20% coaching and mentoring and 10% formal classroom instruction. The key, is how you link all those things together. The MBA provides that opportunity.

What advice do you have for aspiring business leaders?

If I look back on my career, I see leadership as a skill used in all walks of life; I’ve been a leader as a teacher, an officer, a CSO in a large corporation and as a father.

It’s important to recognize that you have got to change your approach with different groups and different individuals. If you try one single approach to a group of individuals, you will fail. Each individual requires a different form of motivation. 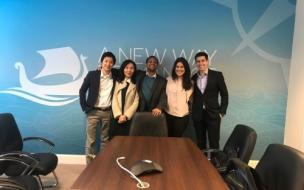