After graduating with an undergraduate degree in public policy from Duke University, Julia Hawkins entered the startup world. However, the company she worked for exposed her only to poor leadership and business acumen.

Her search for pastures new took her into an executive assistant role for a VC firm where she spent four years. But the role she was placed into was far from the role she craved.

Hoping her third move would be the charm, Julia then decided it was time to augment her business acumen. She enrolled in business school and, in her words, was looking to “get back in the swing of startups.”

Julia chose Cornell University’s Johnson Cornell Tech MBA in New York City. She says after speaking with current students there, it was a no brainer.

Everything is “super practical,” she explains, and the curriculum offered the opportunity to study rapidly changing and cutting-edge tech topics. “You come to Manhattan and it’s full steam ahead on startups and disruptive technology!” she smiles.

Julia says that the atmosphere at Cornell Tech is one that promotes equality among students and empowers women to land tech-based roles.

The WiTNY (Women in Technology and Entrepreneurship in New York) program is one such initiative, open to all members of the Cornell Tech community.

Students can participate in lunch-and-learns; workshops on issues facing women in technology and entrepreneurship; a speaker series with industry leaders; and have access to a network of female colleagues and executives.

There are also opportunities to volunteer as mentors for high school and undergraduate women in the New York City area.

“Cornell Tech is empowering the next generation of women in technology, and giving back also means that [students] feel empowered as well,” Julia explains.

She admits there are still fewer women than men in the Johnson Cornell Tech MBA program—only just though, the class of 2019 is 41% female—but women are treated as very valuable assets to any team. “There’s a lot of talk in class about women leaders in technology,” she says, “and how diversity increases your bottom line—it’s not disguised.”

That diversity goes beyond men and women, too, and is woven into the curriculum. An approach to cross functionality means Julia took classes with engineering students, sat in on blockchain and computer science classes, and took courses on networks and markets, ethics and technology.

“This is by far the most diverse group of people I’ve ever been among and you feel immediately like you’re all teammates,” she continues.

“It isn’t about the MBA who’s telling the engineers what to do, it’s everybody working together toward a common goal, and you also learn how different people are from you.”

The melting pot of diversity, leadership, and empowerment led Julia to co-found her own company during the Johnson Cornell Tech MBA—Cabinet, Inc.

Cabinet, Inc. is an online platform that connects administrative professionals together in one space. Here, they can share advice and recommendations—for hotels, meeting spaces, appliances, for example—and connect and share their knowledge base with peers.

The idea originates from Julia’s time as an executive assistant, where she saw the trials and tribulations of the modern administrative professional. She says she was determined to help this group of people who are oftentimes left to their own devices and have to think fast and solve challenges off the cuff.

Julia was able to push on with the idea after Cornell Tech’s Startup Studio—part of Cornell Tech’s curriculum for all graduate degree programs—where she met Amber Chen, a design student at Parsons School of Design in New York City.

They were on the same team during a project on the class—Cornell Tech has a partnership with Parsons School of Design—and after spending four months formulating their business plan, decided they wanted to set it up.

“It’s been critical to have Cornell Tech provide us office space,” Julia asserts, “because it validated that we had something going for us, and gave us a safe place to accelerate our ideas.

Now, she says she wants to take Cabinet, Inc. to the next level. If she gets her way, the venture that grew out of Cornell Tech will become the number one technology resource for administrative professionals. 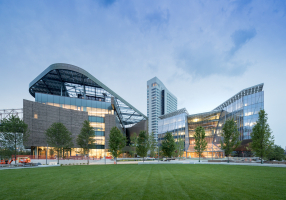