Home > News > Hear From Business Schools > Want To Impress Your Boss With A TED-Style Presentation? Read On!

Want To Impress Your Boss With A TED-Style Presentation? Read On! 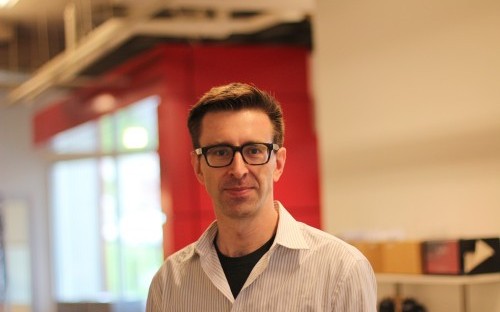 Spain’s IE Business School Professor Lombardo believes that anyone can be great at communicating if they have the right tools.

He’s also founder and executive director of TEDxSomerville, MA. The TEDx program is designed to give communities, organizations and individuals the opportunity to stimulate dialogue through TED-like experiences at the local level.

C. Todd introduced two elective classes to the IE Business School full-time MBA programme: Presentation Design: How to Craft and Deliver a Compelling Presentation; and Business Model Design and Innovation. He tells us that the common thread in the various exciting ventures he’s been involved in is being great at communicating.

We chatted to C.Todd to find out if being a great communicator is a natural talent or something that can be learned. Believe it or not, C.Todd was doing something presentation-related when we caught up with him.

He was grading presentations from his Presentation Design class. If you’re an IE MBA who took that class, you might want to skip over this paragraph. He says you guys could have done so much better. "So many students grabbed their images from Google and didn’t tell a story". C.Todd thinks that Flickr is much better for images especially when used under the a creative commons licence!

Granted it’s probably hard to please someone who organized the first TEDx event in all of Spain. However, C.Todd says that anyone can learn to give a great presentation, and mastering the art of giving presentations is vital to being a good business leader. “If you can’t communicate your value proposition to a client or persuade your colleagues that your ideas will be a success then you’re faced with major challenges”, he said. In other words, you need to give good presentation in if you're going to be a successful business person.

His top tips for giving a great presentation are: be engaging, incorporate an emotional element, be audience-centered, use the right visual components, and tell a story.

Begin by asking yourself about the environment and the context of the talk. By that he means assessing who your audience will be in order to think of ways to hold their attention and speak in a way that appeals to them. Pay attention to your audience to make sure you’re engaging them and if it looks like their attention is waning, insert a relevant joke.

C. Todd advises avoiding forced humour as “that’s not really funny anyway”. When using jokes, there's a chance you might tell a joke that you think is extremely funny but no one laughs. If that happens, he says to be ready to laugh at yourself, ignore it or even risk making another one. Being a good presenter means you need to be able to improvise and keep moving forward and being a good improviser comes with practicing a lot.

“Practice with your friends, practice to empty chairs, get into the venue and practice there if you can”, says C. Todd. The TED speakers who we think are so incredible have rehearsed a lot, he says. Other ways to re-engage the audience are to ask a question or invite some reaction from the audience. In C. Todd's experience, audiences are often incredibly good at responding to a request from a presenter.

When you use images, keep them relevant and useful. Think of the message you're trying to convey rather than slapping random images on the slides.

We also asked C. Todd about strategies for presenting in teams and he said to divide and conquer but keep it cohesive. “If you’re working in groups of three of four, the tendency is that you get three sub-presentations and not a cohesive one. You really have to make your message integrated”, he says.

We ended our conversation by talking about whether its true that people are more scared to speak in front of an audience than of death? To be frank, we don’t know where that thinking originated from or how valid it is. But, follow C.Todd’s rules and you have one less thing to worry about in life. “Go watch some TED videos and see what resonates with you. You can start out by copying their style until you eventually come into your own”, he says.