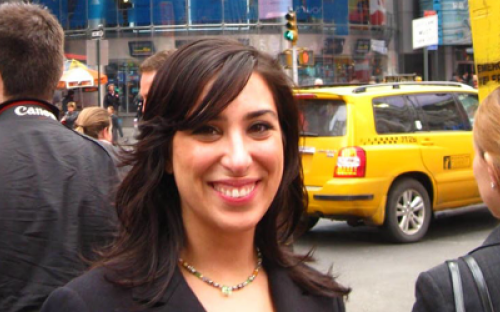 Nina Fattahi loved her job in financial sales, but thought it was time to prepare for the globalised business world

New Yorker Nina Fattahi already had a high-flying career as a sales executive at Standard and Poor’s, but she headed to Grenoble Ecole de Management for an MBA that would raise her game internationally.

Nina, 31, joined the Grenoble MBA in 2010 with nearly seven years of Wall Street sales experience – that most coveted of business skills – behind her.

She spent three and a half years as a Sales Executive for the Valuation and Risk Strategies division of Standard and Poor’s and, prior to that, over three years as Sales Representative for asset manager MFS Investment Management.

She loved being on the client facing side of business and working with C-level executives at investment banks, hedge funds, and asset management companies. It was great, says Nina, because she was able to build relationships and also negotiate the terms of the business relationships

But Nina wanted to broaden her horizons and look for opportunities outside the US. Grenoble Ecole de Management was already familiar to her, and that’s where she turned for a heavy-weight MBA that would take her out of her comfort zone. She had spent a year abroad there during her first degree, a BSc in Finance and International Business from the University of Connecticut, so she knew what the School offered.

“Our class of 42 had 22 different nationalities. In a globalized world, this type of scenario is not uncommon and I wanted to be able to learn how to work with people from many different nations.” The Grenoble MBA also appealed to Nina in terms of its high international ranking and "attractive cost-to-value ratio".

The Grenoble MBA has helped Nina achieve her goal of learning more about the cultural aspects of doing business across borders and gaining a better understanding of European markets.

She quickly learned to adjust her communication style and approach: “It was a great challenge to get adjusted to a new way of life and to learn how to communicate in a different language and culture,” she says. “I quickly realized that my New Yorker style of getting things done would not work in France. I learned how to modify my behaviour to be more in line with the way the French communicate in order to accomplish tasks.”

She also participated in the Global Management Challenge, the world’s biggest strategic management competition, with her team reaching the semi-finals. It was an exercise in group work and time management that simulated what it would be like to work in a senior management position in a big firm, and the pressures the leadership team would face in making important decisions.

But it hasn’t all been work, work, work! A born traveller, Nina had been on treks as far afield as Peru and New Zealand before arriving in Grenoble. While in Europe she has taken the chance to visit several nearby countries, including Iceland, the UK and Egypt

She’s currently in Grenoble completing her dissertation, perfecting her French, and looking forward to returning to the cut and thrust of B2B sales, ideally in the tech or finance industry. Before she goes back to the business world, she's hoping to spend this summer volunteering in South-East Asia.

Fresh from her experience of working with people from all over the world, Nina is confident that her Grenoble MBA has been a great investment. "My new understanding of the cultural and logistical differences between global businesses will be an asset wherever I go next!" she says.