How A Group Of EMBA Students Is Changing Lives In Uganda

After seeing the hardships faced by fellow business school students on a class trip to Uganda, a group of GEMBA students from Copenhagen Business School decided to do something about it

CBS GEMBA students have an annual study trip to Kampala, where they collaborate with MUBS students

Peter Schou was sitting in a restaurant in Kampala, Uganda with his Global Executive MBA (GEMBA) colleagues from Copenhagen Business School (CBS) in December 2018.

They were in Uganda for an international module where they collaborate with MBA students from Makerere University Business School (MUBS).

The MUBS MBA students that Peter and his peers interacted with had a lasting impact on them. Two students in particular.

One woman had been in a car crash and lost both her legs. She still worked part-time in a local bakery while studying, only able to manage with the support of family and friends.

Another lived in a remote village 18 hours outside Kampala. She had to take the bus to the city every Thursday, study Friday, Saturday, and Sunday, and then travel 18 hours back to her home.

As a group, they questioned how they could complain about having to travel 30 minutes to class, when these women, with no means and spending each month just trying to pay for their education, showed unrelenting drive.

“We were inspired by them,” Peter says. “We were sitting at dinner and a couple of us asked, ‘Why don’t we see what it would take for us to help them out?’”

Peter led a fundraising initiative and, between them, the GEMBA class managed to raise money to fund the two women for the remainder of their course.

A new perspective on entrepreneurship

Peter (pictured below, right) admits that his class was a bit skeptical before the Kampala trip. Nobody from the class had been there before, and they questioned if this was the best place to learn about entrepreneurship and innovation.

When they arrived In Uganda, they soon saw that entrepreneurship there is a matter of life or death. A lot of people have no choice but to start their own business to earn a living.

“It was an eye-opener for us,” explains Peter, “it was valuable to see the entrepreneurship part of it all, how people did whatever they could to survive.

“In Denmark, people say if we don’t have a job, we can always live on welfare rather than the mindset that we have to do something. [In Kampala], it doesn’t matter what it is, they find something in their work to support their families. It’s more about the mindset of the people.”

Associate professors at Copenhagen Business School, Thilde Langevang and Soren Jeppesen, have built a relationship with MUBS since working on a research project in Uganda almost a decade ago.

Since then, students pushed for an experiential study trip where they got to practice what they learned at business school on the ground. Hence the Kampala trip became an annual event.

During the trip, students from CBS visit local companies, share classes with MBA students from MUBS and collaborate with them on group work. It’s incredibly valuable, says Peter, to learn about their reasons for studying an MBA, and how they often struggle through hardship to do so.

As well as funding the two women from MUBS, the trip inspired Peter to donate to Street Business School he visited in the area. It’s an organization that funded and trained underprivileged women in business to help them start their own businesses.

The equipment on which they delivered presentations was outdated and worn, so Peter arranged for them to receive a number of new, high quality projectors.

Rebecca Namatovu, program manager at MUBS, says that the fundraising initiative has changed the lives of two of her students. There have been previous years in which students have paid the tuition for a single mother doing her MBA.

When Rebecca first communicated with the two women who the class helped last year, they told her that if the information wasn’t coming from her they’d have thought it was a joke.

Rebecca explains that the woman with the 18-hour commute no longer misses classes as often as she used to, she’s excelling, as she no longer must look for alternative ways to raise money to survive.

“These two ladies have become my friends, and they always email when they pass exams and do well,” she says.

Rebecca says that the shared classes with CBS students are always oversubscribed. Her students love the opportunity to speak with foreign MBAs and even miss lunch sometimes just to have more time with them.

They also revel in the company visits, something Rebecca explains is a rare opportunity for MBAs at MUBS.

Has she seen a change in her students?

Definitely. They’re more proactive, curious. They often pick up on theories and examples given to them by the CBS GEMBA students and probe their teachers to delve deeper into certain topics.

“I can’t stress the importance enough, it’s such a wonderful thing. I have seen our students change the way they look at things,” she says.

In Uganda, post-MBA students often stay in the jobs they were in before. They don’t study to move on. But after the visit from Copenhagen Business School, they begin to challenge this.

“I feel with these exchanges we are creating more globally aware students,” concludes Rebecca. 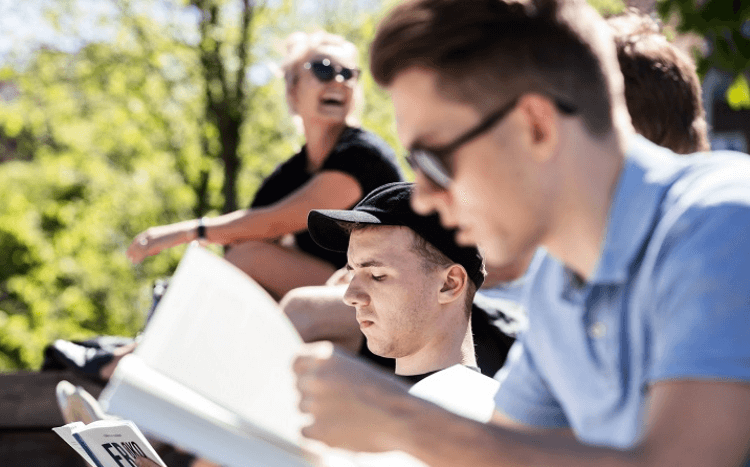