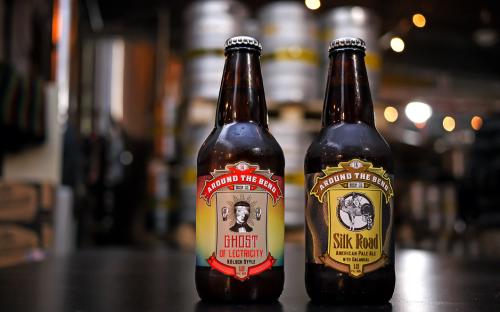 There is a craft beer revolution brewing and MBA students are on the front lines. Over the past decade the number of craft breweries in the US has almost trebled to around 4,000, according to the Brewers Association. Big beer groups, like AB Inbev and SABMiller, are buying out small, independent craft brewers in multi-million-dollar deals.

As craft beer booms, MBA entrepreneurs are breaking into the industry with their own business ventures.

One of the first to do so was David Wedemeier, an MBA graduate from the University of Texas at Dallas' Naveen Jindal School of Management, who moved out of the corporate world to co-found Martin House Brewing Company with his college drinking buddy Cody Martin.

“There was a tide coming and we managed to catch the wave early,” he says.

When David first wrote up his business plan back in 2012, there were four craft breweries in the Dallas, Fort Worth area. Now there are close to 40.

“Competition is heating up!” he says. “When we got in, it was different; it was a very young industry and there was so much space to grow.”

In less than four years, David saw his production brewery — which sells uniquely-flavored craft beers to local bars and grocery stores — increase its customer base from around 12 bars and retailers to 700.

“We’re slowly expanding out into Texas. We have no debt [and] we fund everything through our own cash flow,” he says. “We need to keep doing that, because it’s a very rapidly changing environment here.”

But with the US craft beer market becoming saturated, David, pictured right, is focusing on his local community. He is creating a brand that locals can identify with, and is selling close to home. “For us, the future is right here,” he says.

Yet while craft beer’s rise is seen as a push against globalization, some US-based entrepreneurs are looking further afield —  to Asia.

“It’s a market on the precipice of huge growth,” says Ujjval Patel, a second-year MBA student at the Yale School of Management, who, with three MBA classmates, co-founded Ivy Craft Beer Distributors, which looks set to ship its first batch of craft beer to China by May.

Ujjval came up with the idea after a boozy tour to Asia, while he was exporting craft beers from the US to China. “Everywhere we went —  in China, in South Korea and in Japan — we saw that the price of craft beer was extremely high,” he recalls. “They were selling at $10 or $12 a bottle, compared to $5 or $6 in the US.”

“We saw the chance to make a pretty big impact by getting out to Asia,” says Ujjval, pictured left. “We have a tremendous passion for craft beer and, of course, we love the party life!” he laughs.

Yet breaking into the market will not be easy. Alcohol is a heavily regulated industry. In China especially, government controls make the process of acquiring licenses lengthy and painstaking.

Ujjval’s long-term ambition is to open up craft breweries within Asia itself. “There are tons of new ways MBAs can create value within this industry,” he says. “Big beer-drinking populations like Brazil have yet to fully start their craft beer revolution. There’s going to be a massive explosion in the future.”

One man with his finger firmly on the pulse of the Brazilian craft beer market is Rodrigo Albuquerque, a first-year MBA student at the University of North Carolina’s Kenan-Flagler Business School.

Before relocating to the US for his MBA, Rodrigo abandoned a career in finance to start-up his own craft beer business, Goodbeer4all, an online retailer and beer-of-the-month club.

“In Brazil, it’s all very early stage,” he says. “People are discovering craft beers and craft beer is being recognized as a great product that deserves attention.”

Although his business failed to take off, Rodrigo, pictured right, has no regrets. “The great thing about working in the beer industry is the atmosphere; it was informal, entrepreneurial, and it was all about producing a good product to please the consumer.”

While Brazilian consumers are only just waking up to craft beers, the UK in comparison is in the midst of a full-blown revolution.

“When we first brought our beer from Bavaria to London, there were about seven London craft brewers. Now there are over 70,” says Byron Redman, a University of Cape Town MBA graduate who launched German craft beer distributor AND UNION in the UK.

With more than 1,500 independent breweries, the UK has more per head than anywhere else in the world, according to the Society of Independent Brewers.

However, such is the competition that many UK-based brewers are struggling to survive. “Some breweries are doing exceptionally well, but many are just keeping their heads above water, and some have already started to fall away,” says Byron.

The MBA has some words of warning for entrepreneurs:  “If you think craft beer is going to be an instant success, think again. Like any growing industry, it’s going to go through its phases. There will be winners and losers.”