'Racism Is Not Just A Black Problem—It's Everyone's Problem'

Dr Sean Ferguson explains how the collective problem of racism can be solved at business school, through enhancing representation and widening access for the black community

Dr. Sean Ferguson is associate dean at Asia School of Business in Malaysia

American Dr Sean Ferguson is associate dean at Asia School of Business in Kuala Lumpur, Malaysia, and was previously associate dean of MBA and MSc programs at HKUST Business School. Sean received his doctorate in global education from the University of Southern California.

The Black Lives Matter movement provides a tremendous opportunity for schools to revisit whether they are doing enough when it comes to race, bias, equity, diversity, inclusion, and privilege.

While BLM originated in America, the underlying issues are prevalent in different contexts across the world. As Martin Luther King Jr wrote, 'Injustice anywhere is a threat to justice everywhere.'

MLK called out bystanders who are letting injustice prevail for the sake of the status quo.

There has been progress on race in many aspects of society in America. At the same time, there has been a tremendous level of complacency as countless examples of racism are disregarded. This lack of regard for the negative virtually invalidates any positive progress.

Racism is not only a Black problem; it's everyone's problem. If everyone doesn’t own it, the problem will persist.

Diversity and inclusion at business school

I'm a Black man living and working in Malaysia. But having grown up on the west side of Detroit, and having studied and worked in the US for much of my career, African American culture and racial issues are a fundamental part of my identity.

I am conscious of race every second of my existence, whether I am home in the USA, recruiting students in India, or conducting a study trip in China.

My first job after my bachelor’s was at Procter & Gamble, and they were really big into diversity, taking people from all backgrounds. But in order to work there, you had to think like someone from P&G. There were people from all different races—Black, White, Asian—but we all thought the same way. While ahead of the game 20 years ago, in today’s context it may not be seen as inclusive enough.

At business school, we talk a lot about diversity and inclusion, but we don't talk enough about what it means to have an inclusive environment in which points of view outside of the mainstream get discussed inside or outside the classroom.

The first step towards inclusivity is increasing representation. US business schools are fighting over a very small pool of African American candidates, but they need to further commit to increasing the pool.

More commitment to growing the pool will help create a more representative workforce at the leadership level to facilitate broader conversations on the issues related to race, bias, equity, diversity, inclusion, and privilege.

More commitment to growing the pool will help create a more representative workforce at the leadership level to facilitate broader conversations on the issues related to race, bias, equity, diversity, inclusion, and privilege.

What more can business schools do?

Across America, frustration has reached its boiling point. But it would be a mistake to think this is just a Black American thing.

Similar injustices are taking place throughout the world. Today’s leaders need to develop a heightened awareness of race, bias, equity, diversity, inclusion, and privilege and a willingness to proactively address these issues in their respective environments.

As business schools, we have a responsibility to provide training to our students to be proactive in addressing issues related to race, bias, equity, diversity, inclusion, and privilege.

While having representative leadership is important, graduates need to be equipped with the right skills. Unfortunately, when I see events like George Floyd’s death, and the subsequent protests, it feels like there’s been a breakdown in leadership somewhere along the way. 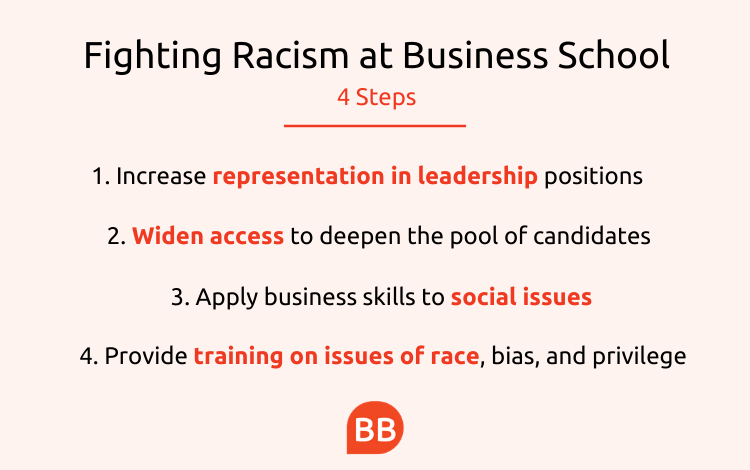 So much of what business schools teach our students is how to optimise an enterprise. We’ve seen recently that businesses are thinking more holistically about their outcomes, not just about profit and loss, but about the value they are creating for their stakeholder community.

When I first got into management education 15 years ago, more students were looking to get a cushy job or maximize earnings. Today, most of them want to be involved in something that is more meaningful. They are interested in sustainable impact and want to leverage the tools learned in business school to solve real world problems.

We need to better position our graduates for success, training skills related to overcoming bias, creating an inclusive environment, making leaders aware of their privilege and the responsibility that comes with that privilege.

For example, business school graduates could be an integral part of the defund police debate.  They would be participants ideal in helping cities maximize the use of resources, to discover systems, processes, and approaches towards maximising the outcome of public safety versus policing the citizens.

Pairing these skills with the traditional elements of maximizing enterprise outcomes, graduates can be transformational in their impact.

The US must be a leader in fighting racism

In America, racism is a fundamental part of many institutions.

Clearly, we are a long way off where we should be. In 2020, Princeton just had their first black valedictorian, and MIT had its first black female student body president—these are still all ‘firsts’.

When President Obama was elected as president, many thought we were ushering in post-racial utopia. It was easy to say, 'Obama’s president, everything’s good.' What Obama showed is what the ceiling could be. His election, however, was not representative of the day-to-day experience of the African-American.

If American business schools elevate their commitment with regards to race in America, it would go a long way to creating the action-oriented leaders needed to address injustice while creating a more inclusive society.

Can Business Schools Do More To Support The Black Community?