After A Career In Sports? Check Out This Sports Management MBA

Available at bachelors, masters, and MBA level, EU Business School’s Sports Management specialization is giving students a foot in the door to a competitive industry

With an MBA in Sports Management from EU Business School, you could score a job closer to the action

The 2018 FIFA World Cup is in full swing. But what kind of soccer supporter are you? Are you content to stand on the sidelines and cheer as your team charges towards victory?

Or do you see the stadiums filled, the trophies lifted overhead, and itch to get involved? If so, EU Business School could give you the tools to make your dream come true.

The multi-campus business school’s sports management specializations, offered at both undergraduate and graduate level, are providing students with valuable inroads to the multibillion-dollar global sports industry, by providing the networking knowledge and specialized skills that are becoming increasingly vital to sports industry success.

On the MBA in Sports Management, students get all the training of a traditional MBA—including modules in business law and strategic management—before developing their knowledge and understanding of specialized sporting subjects.

This introduces students to everything they need to know for their new careers in sport—from the principles of sports marketing, to organizing unique sporting events, to the psychology of sports.

For Siddartha Tewari, who graduated with an MBA in Sports Management from EU Business School’s Barcelona campus in 2013, the course was an important step in pivoting his career—from engineering, which he studied at bachelor’s level, into sports.

“From my school days, I have been a sports guy inside-out,” Siddartha says. “In my final year of engineering, I heard about the MBA in Sports Management [offered by] different universities around the world, and that’s when I started shortlisting the options.”

Faced with many attractive options, Siddartha ultimately chose EU Business School for his MBA—and he hasn’t looked back since.

In addition to the specialist knowledge he gained on the course, the teaching that stood out the most to Siddartha was the guidance he received on networking in the sports industry from faculty and guest speakers.

“Listening to high-profile officials in these clubs and organizations was a lesson one can’t learn in a classroom,” he recalls.

In the years since his graduation, this key training has paid huge dividends for Siddartha’s career. A month before he completed his MBA in January 2014, Siddartha landed an internship with Aspire Sports Management through the network he had created during the MBA.

He worked at Aspire from 2014 to 2017, during which time he also worked on international relations projects for GLOP Sports Management. Siddartha left both companies in early 2017 to return to EU Business School for a second MBA, this time in Communications and Public Relations.

Having worked with them before, he knew that the faculty at EU Business School were the best match to give him the remaining skills he needed, and now that he’s graduated he’s started his own business: YouTube channel SportsFanTV.

The venture combines the knowledge Siddartha has gained from both his specialized MBA programs, as it aims to connect sports personalities with fans around the globe. He has a team of 12 working alongside him—most of them students or alumni from EU Business School.

For Siddartha, there is no question that the MBA in Sports Management at EU Business School was hugely valuable in helping him pivot his career.

“With the passion I have for sports, I would have achieved what I have today without an MBA degree—but it would have taken way more time and energy,” he says. “But with the MBA in Sports Management, followed by the second MBA in Communication & Public Relations, I believe I learned the art of how to establish myself in the industry, and am now working hard to grow in it.”

The same can be said for Clémentine Carles, a 2018 graduate from EU Business School’s Geneva campus with an MBA in Sports Management.

A lifelong sports enthusiast, she decided against continuing her childhood pastime of competitive horse-riding, choosing instead to remain in the sports world in a business capacity.

She, too, felt that the biggest asset that EU Business School gave her was a wide network: “My favourite part [of the MBA] was the specialization semester,” she says. “We had the chance to learn with people from the sports industry, and that helped me to gain knowledge and contacts.”

Even for those with extensive experience in the sports industry, the MBA in Sports Management at EU Business School still has much to offer. This is the case for Pedro Gutierrez Engel, a current MBA student at EU Business School’s Munich campus, who had worked for an agency for football players in his native Brazil prior to his enrolment.

“I’ve always worked in sport—ever since I was 20 years old,” says Pedro. “First as a reporter, then as a press officer, and for the last couple of years as a football players’ agent. My life is sport, but I figured it was time to take a year to study and improve myself.”

He has done exactly that, and his long-held passion for sport has certainly translated to his studies—Pedro describes himself as “100% focused” on his MBA, as he is currently working on his thesis at the same time as presenting a business case to Brazilian companies.

“I think that my MBA is opening the doors of the world to me,” he says. “Just as I [expected] before I started studying [at EU Business School.]”

If Siddartha’s example is anything to go by, Pedro will soon have access to a world of possibilities. 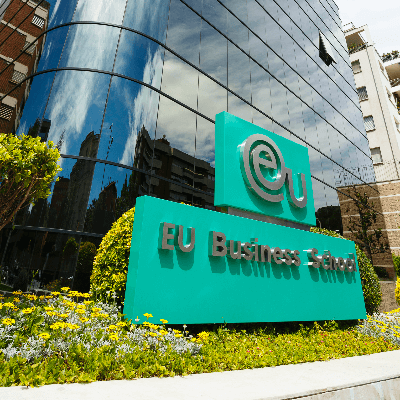