Looking out for number one isn’t always a ticket to the top for women in business. We talk to female MBAs to find out how sisterhood has helped them succeed 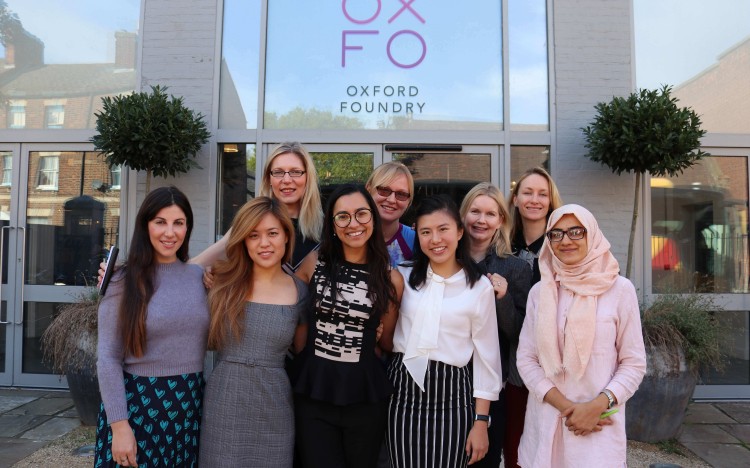 The University of Oxford's L.E.V8 Women program is just one example of women's networks at b-school

It’s no secret that female friendships are an overwhelmingly positive force in women’s lives. Science supports it: researchers at the University of Michigan found that when women feel emotionally close to other women, they produce more progesterone, a hormone that boosts mood and alleviates stress.

Simply put, sisterhood feels good. It also, according to recent findings by the National Academy of Sciences in the US, has professional benefits.

In a study of graduates from a high-ranking US MBA program, researchers found that women’s success in their post-graduate careers was determined not only by ‘high centrality’ in their school-wide network, as was the case with men, but also by high centrality within a close network of other women.

According to the study, the ‘gender-related tacit information’ that these networks provided proved to be an asset to women’s later careers, and it’s not hard to see why.

“I got my job from networking with women”

For Patti Brown (pictured right), director of the Global MBA at ESSEC Business School in France, women’s networks provided concrete practical information that has helped her advance her career.

“I got my current job from networking with women!” she laughs. “It’s how I heard about it.”

The tangible effects of women’s networking on their careers is wide-ranging—from cases like Patti’s, where news of a job opening is spread, to ‘softer’ information about company culture.

For instance, when entering the jobs market, it can be important for women to find out whether their prospective employer offers a supportive environment for women’s advancement.

This can be near-impossible to ascertain without a ‘woman on the inside’ to weigh in—and the benefits aren’t limited to careers in big corporates. For female startup leaders, too, well-connected women who have trodden the paths you are navigating can be a distinct advantage.

Katherine Li (pictured below right) is a recent MBA graduate from Saïd Business School at the University of Oxford. Originally a political science student, she thought she’d make her mark in public service, but soon found that the law felt restrictive.

“I’m not always the best at following rules,” she jokes. “I figured that was probably not the environment for me.”

Coming from an entrepreneurial family—her father started an imaging institute in Los Angeles—she decided to go into startups. In the summer of her MBA year, she launched her own venture, Butterfly FX, which describes itself as the ‘Netflix of education’, providing on-demand educational tools to advance financial literacy.

While working on the company, Katherine became involved in the L.E.V8 Women program at the Oxford Foundry, the University’s entrepreneurship hub, tapping into their learning resources as well as the peer-to-peer networking that was offered. For Katherine, the network has proven most useful in the search for funding.

Indeed, this is an area that is especially fraught for female startup leaders. Data shows that only 10% of investor funding in the EU goes to women-led ventures; in the US in 2018, this figure was a mere 2.2%.

“I know that when we pitch, when we look for funding, gender still matters,” says Katherine. “[Women’s networks] funnel you towards people that are more supportive, that maybe understand more of the challenges you’re facing.”

The key benefit of women’s networks for Katherine is having a safe space to discuss these issues openly—but that doesn’t always mean restricting men from the conversation. “I think the reason that we feel we have to create separate women’s spaces is that we don’t feel comfortable in other spaces that are open to everyone,” she says.

“But if we set ourselves apart it sometimes causes challenges too—[at the Foundry,] we’ve been trying to figure out when it’s helpful and when it’s not helpful.”

The solution, in Katherine’s opinion, is creating open networks that are nonetheless an encouraging environment for marginalized people to address the challenges they face.

“I think the way that I would differentiate [this kind of network from others], which may even fall outside of gender, is if it’s a safe space for you,” she says.

Check out the latest episode of our podcast, The Business School Question:

Do Women Work Harder Than Men?

This emphasis on creating a safe and supportive environment is shared by Kelsey Ireland, a current MBA at London Business School. Kelsey is a member of the school’s Lean In Group, a subset of the Women in Business Club, and for her, the women-only nature of the groups is a key element.

Kelsey (pictured right) has been part of women’s business networks for years, having been a chair for a non-profit, women-only network in her native Vancouver before her MBA. However, she believes that these connections take on a unique importance in the b-school environment.

“Business school is by nature competitive, so you’re not necessarily open to supporting other students and celebrating overcoming your [shared] challenges to find success,” she says. “Women’s networks, especially smaller ones, allow you to let your guard down.”

Kelsey was the only woman on her team in her previous role in finance, and she well remembers the pressure she felt to set an example and not show weakness.

In contrast, the women’s networks she’s involved in allow her to release her anxieties and discuss them in an open forum, with women from many different backgrounds and industries—a difficult combination to find outside of business school.

“It’s amazing to sit beside other women and say, ‘Recruiting is so challenging, I feel like I’m constantly failing,’ and to hear the woman across from you say, ‘Oh my gosh, I feel exactly the same way,’” Kelsey confides.

“We’re stronger if we support each other—we’ve overcome enough to get here, let’s not be competitive: the world’s big enough for all of us to succeed.”

“The number one barrier is ourselves”

Evidently, women working together to share confidences and contacts has a huge benefit for their careers post-MBA—and this is true across the world.

Sabrina Ren Yan (below right) is a current MBA at HKUST Business School in Hong Kong with a background in tech and data science, and she has been one of the key players in setting up the MBA women’s network at HKUST.

The idea for creating the women’s network stemmed from a lecture that she and some friends attended as part of a female leadership program.

“The key message was that of course there’s a lot of barriers preventing women from stepping up, but the number one barrier is ourselves,” Sabrina recalls.

She reasoned that systemic change was an essential long-term project that needed to be done, but that changing her mindset about success in business was something that she could do immediately.

Sabrina realized that if she practised confidence in her own competence, she would grab more opportunities—and a network of women helping each other to nurture the same mindset would be even more powerful.

“Our primary goal at the beginning was to bring this awareness to others,” she says. “But there are other benefits: when we get really collected, we activate our networks.

“We now have connections with Women’s Foundation Hong Kong and the Women in Finance organization, and the resources we are able to get are tremendous.”

When it comes to building a career, women are dealing with a different set of challenges.

Thankfully, for women MBAs, business school provides a ready-made support system to overcome them, contrary to the received impressions of women’s dynamics in the workplace; that women must be competitive with one another; that there are only so many seats at the table.

Instead, these networks demonstrate that, for women in business, a successful colleague isn’t to be feared or isolated. You could be each other’s greatest asset.