Meet The New Prime Minister Of The UK - A Stanford MBA

Rishi Sunak has just been named the next Prime Minister, find out how his Stanford MBA led him to the top of the UK government and why it will help now he's there © Ministry of Housing, Communities and Local Govt via Flickr

As Rishi Sunak moves into Number 10 Downing Street, find out more about the incoming UK leader. Will his business credentials help him to succeed?

Rishi Sunak, the new UK’s third Prime Minister of the year, will take over from Liz Truss, who resigned from the role just six weeks after she beat Rishi in the Conservative Party leadership race by  57.4% to 42.6%.

As well as reuniting a divided political party, Rishi's first job when he forms a government, will be to confront the damage of his predecessor’s ‘mini-budget’ of tax cuts which has led to a volatile pound at a time of economic instability and a cost of living crisis.

So what do we know about Rishi Sunak?

Like Liz Truss, Rishi read philosophy, politics and economics (PPE) at Oxford. However Rishi also took time out to gain an MBA from Stanford University in California as a Fulbright Scholar.

Stanford Graduate School of Business is home to one top MBA programs in the world. It is sixth in the Financial Times MBA Ranking 2022 and third in the US News & World Report Ranking, and a member of the M7 Business Schools.

Rishi exchanged England for California at the age of 24. His MBA was the final part of his impressive education and was formative in his first steps into a financial career in which he worked as an analyst at Goldman Sachs and a hedge fund manager at The Children’s Investment Fund Management before setting up his own hedge fund with former colleagues.

The financial skillset the new PM gained at Stanford’s two-year MBA may help him to tackle some of the UK’s current challenges. The top qualification is said to equip students with a global perspective and financial understanding--hopefully enough to endure in rocky economic times.

Rishi is also the first British Asian to take up the mantle as Prime Minister of the United Kingdom and will be the first to be confirmed in role by its new King.

Main article image credited to @Ministry of Housing, Communities and Local Govt with the rights of this license 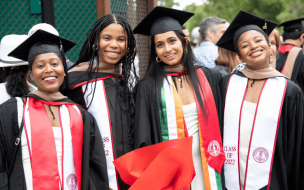