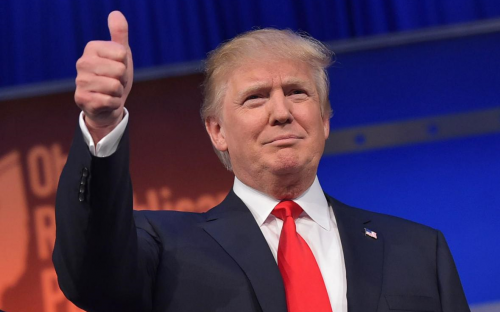 Donald Trump is no stranger to scandal

These are the traits and activities of some of the world’s wealthiest and most influential leaders in business and politics.

In the US, a business tycoon-come-bumbling buffoon lumbers his way towards the Republican presidential nomination.

In Europe, the world watches on as investigators scuba-dive through the murky depths of depravity which make up soccer’s governing body.

For MBA students, leadership is the crucial “soft-skill”; it is valued by some employers more than exam certificates.

They’ll often use real-life case studies as examples to help shape the minds of their ambitious young protégés, and to show them what to do and what not to do as a leader.

They have had no shortage of material to work from.

The fact that Donald John Trump has even a morsel of a smidgen of a chance of making it to the White House is a scandal in itself.

Donald rubbishes climate change as just “the weather.” He’s proposed a ban on all Muslims entering the US and called Mexican immigrants rapists. He’s accused black people of an inherent laziness.

He claimed nobody would vote for rival Republican presidential candidate Carly Fiona on account of her looks. “Look at that face,” he said. “Would anyone vote for that as our next president?” Oh, the irony.

It is clear that inside that toupee-topped skull exists a vast moral wasteland; a desert place where politically incorrect tumbleweed drifts fecklessly in whirling winds of general ignorance.

While the ex-Wharton undergrad inherited a real estate empire from his father, many of his own business ideas – luxury airline Trump Shuttle, a travel search engine, magazine and vodka brand – have failed spectacularly.

Trump University, which offered a highly questionable MBA program before going out of business, is being sued for defrauding its students.

“I’m sorry about me [and] how I am treated. I’m sorry that I am a punching ball.”

So read the heartfelt apology from Sepp Blatter, president of soccer’s world governing body FIFA, after a shady $2 million payment to European soccer boss Michel Platini resulted in both men being banned from the sport for eight years.

The illegal payment was one of the latest developments in a multimillion dollar corruption scandal which has seen senior FIFA officials charged with taking huge bribes from US firms in return for TV and marketing rights, and relating to the selection of South Africa as the host of the 2010 world cup.

Yet while the pillars of his FIFA empire crumble around him, Sepp – who once insisted that female soccer players should wear tighter-fitting shorts – remains shamelessly obstinate.

In September, VW admitted that 11 million of its diesel cars – including those of manufacturing subsidiaries Audi and Porsche - were fitted with software designed to cheat emissions tests.

It then emerged that VW had also understated the carbon dioxide emissions of thousands of its vehicles - adding further fuel to the ozone-burning fire.

Subsequently VW's CEO resigned, sales fell as it recorded its first quarterly loss for 15 years, and it could yet face criminal charges.

Michael Horn, CEO of VW America and an MBA graduate, offered an insightful summary of events:  "We've totally screwed up," he said.

It was revealed the Japanese tech giant overstated profits by $1.3 billion over seven years.

When news of the scandal broke, Toshiba’s senior executives called a press conference, resigned and performed a ritual bow in apology. This achieved little.

The company’s shares have since fallen to six-year lows, it faces a proposed $60 million fine, forecasts a $4.5 billion annual loss and plans to cut 7,000 jobs.

Who are we to argue?

He referred to German chancellor Angela Merkel as an “un-f***able lard-ass” and described Barack Obama as “young, handsome and tanned”.

He has purported links to the Mafia, he’s been convicted for tax fraud and he’s banned from public office for corruption and bribery.

In 2013, the 79-year-old playboy was handed a seven-year jail sentence for paying for sex with Karima El Mahroug, 17, a Moroccan dancer who is nicknamed Ruby the Heart-Stealer, at one of his infamous “bunga bunga” sex parties.

Yet Italian prosecutors accuse Silvio of paying more than $10 million in bribes to girls in exchange for false testimony.

Now Silvio sits alone in his Milan mansion, his reputation in tatters. The party is well and truly over.