Two-thirds of business school programs have seen applications increase during the pandemic, according to new GMAC research

67% of business schools saw an increase in applications in 2020, according to the new Application Trends Survey published today by the Graduate Management Admission Council (GMAC), which tracks demand for MBA and master's programs. The total volume of applications to global business schools increased by 2.4%.

This is a significant rebound from 2019, which saw overall applications fall by 3.1%, as well as over half of schools reporting a decrease in applications.

GMAC CEO Sangeet Chowfla puts this down to the effect a receding economy has on the business school decision in candidates’ minds.

“The opportunity cost of leaving a job to pursue an MBA or business master’s lessens as economies begin to regress. As a result, we are now seeing more people thinking about b-school to grow or improve their career prospects," he says.

After years of falling demand, applications to US business schools have seen a 20.6% spike in 2020. 67% of US programs reported increases in applications, a big improvement on a figure that has remained below 40% since 2017. 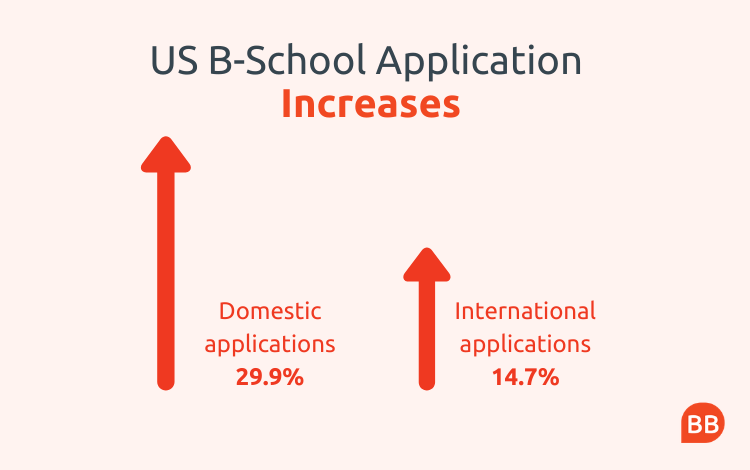 Growing numbers among domestic students is particularly important for the US, where they make up 63% of the total application pool.

Demand for program types in the US has seen changes. Online MBAs have seen the biggest percentage growth—with 86% of programs reporting growth. This a response to the increasing online orientation of business schools, as well as uncertainty over travel restrictions as a result of COVID-19.

Two-year full time MBAs have also rebounded in popularity, with 75% of programs reporting growth overall. This is particularly high among top-ranked MBA programs, whose reputation and reliability remains consistent in the face of a changing business school landscape. 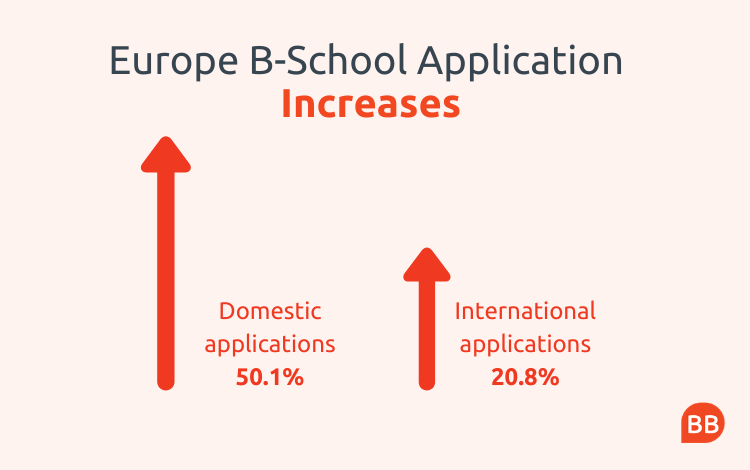 2020 has been a stellar year for European applications, with business schools in Europe reporting a 24% increase overall, up from a 0.9% increase in 2019.

Among these international applications, around a fifth come from central and south Asia, with an additional fifth from east and southeast Asia. This perhaps accounts in part for the decline in domestic applications to Asia Pacific.

However, applications to Asia Pacific fall 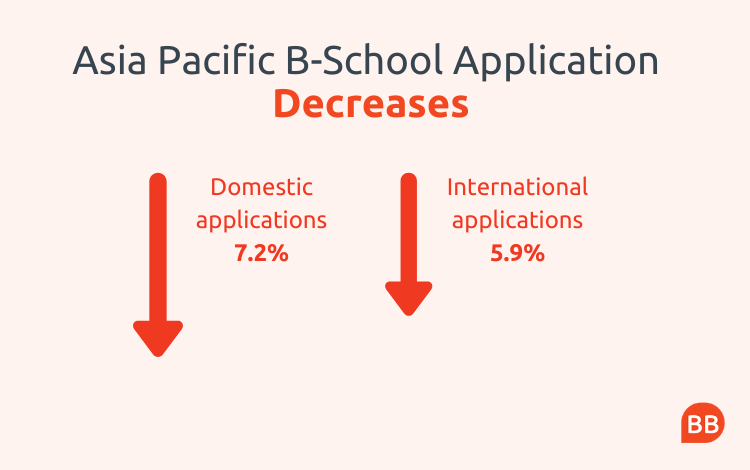 Business schools in Asia Pacific have seen a growing demand over recent years, often credited with pulling candidates away from the US. In 2020, however, Asia Pacific has seen a 7.1% decline in overall applications.

This is a combination of a 7.2% fall in domestic applications, and 5.9% decrease in international applications.

The demand for two-year full time MBA programs remains strong, however. 61% of these programs reported growth, compared to just 40% of one-year MBA programs, and 43% of post-graduate programs (PGPs), the Indian equivalent to an MBA.

Experts blame a rocky year for Asia Pacific’s decline in applications. One admissions officer, in the report, cites the Hong Kong protests, followed by the outbreak of the COVID-19 pandemic, for Asia’s weaker performance in 2020. India, which is the region’s largest applicant pool, has faced different extents of national lockdown which could be set to continue.

Changing demand for MBA vs Masters

2020 has also seen changing demands towards the popularity of certain types of programs.

As the economic outlook remains uncertain for the short to medium term, reinvesting in education and applying to business school seems to be at its most popular in nearly a decade.

Find out what Biden's Presidency Means For US Business Schools

Business schools are really growing in popularity during this challenging time. http://www.confiduss.com/en/services/