The new Positive Impact Rating asks students to rank their schools based on their positive impact on society. We tell you which business schools came out on top

UC Berkeley Haas is among the best business schools for impact, according to the new Positive Impact Rating (Credit: UC Berkeley Facebook)

Rankings have long been a resource for applicants to MBA and masters programs to distinguish the best business schools. 80% of applicants say they look at rankings when they decide where to apply, according to the Graduate Management Admission Council (GMAC).

But rankings have come under fire for too great a focus on jobs data, such as post-graduate employment rates and salaries.

2019's Business School Rankings For The 21st Century report highlights the outdated methodology of ranking systems, and how this might affect how schools recruit and behave.

This was the precursor to the new Positive Impact Rating (PIR), unveiled at the World Economic Forum 2020 in Davos, which categorizes business schools, not by employment outcomes, but by the positive impact they have on society as a whole. 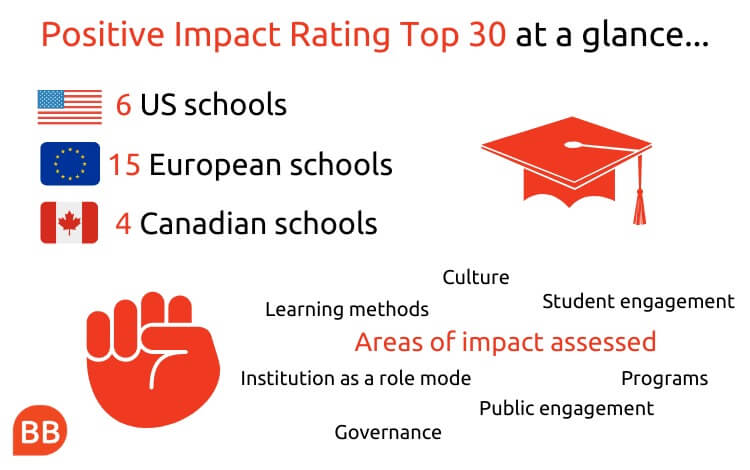 The PIR reached out to the top 50 schools in both the FT's Master’s in Management ranking and the Corporate Knights Green MBA ranking. In total, 2450 students from 51 schools were surveyed—45% of whom were bachelor’s students and 55% were master’s students.

Students rated schools based on the positive impact of their governance, culture, programs, learning methods, student engagement, the institution as a role model, and public engagement.

Level 4, recognizing 'transforming schools with a positive impact culture, embedded in governance and systems, with visible results progress in many impact dimensions', features nine schools. Level 3, meanwhile, recognizes 'progressing schools demonstrating evidence of results across some impact dimensions', and features the other 21 schools on this year's list.

Which schools came out top?

The best business schools for making a positive impact on society include well-known schools like Haas School of Business at UC Berkeley and Indian Institute of Management (IIM) Bangalore.

Berkeley Haas is recognized in the report for the Defining Leadership Principles which it looks for in all of its students and faculty. These are: question the status quo; confidence without attitude; students always (emphasizing the constant pursuit of learning); and beyond yourself (encouraging students to think about the world beyond what they know).

Haas is joined by two other US schools in Level 4—Grossman School of Business at the University of Vermont and Scheller College of Business at Georgia Tech.

The ranking also shines a spotlight on lesser known schools. It was a big result for Level 4-ranked INCAE Business School in Costa Rica, a school which doesn’t appear in either the Corporate Knights or FT rankings.

Overall, European schools comprise half of the schools featured. In Level 4, this includes EADA Business School in Spain, Antwerp Management School in Belgium, and Maastricht University School of Business and Economics in the Netherlands.

Why does measuring impact matter?

It’s clear that salaries and employment prospects are still an important priority for students. Career focus remains the second most important selection criteria for applicants when choosing where to apply, according to the 2019 Graduate Management Admission Council (GMAC) Prospective Student Survey.

But rankings have come under scrutiny for the way their methodology affects how business schools make decisions about who to accept, or what profession their graduates go into.

It has even been suggested that schools have been reluctant to accept female students, on account of the post-graduation gender pay gap.

The Positive Impact Rating comes at a time when there’s a slow shift in business schools away from high paid jobs and towards other factors like impact and sustainability. It commends schools that encourage students to have impactful careers, which is becoming more common in business school graduates.

Students surveyed by the PIR had changing demands about what they are looking for in a business school. The full report highlights several things that students want schools to stop doing, including ending the emphasis on profit maximization, and not hiring professors who don’t want to do good.

The Positive Impact Rating clearly has its limitations. It's clearly selective, given the limited number of schools surveyed and how they are chosen. Given the schools were chosen from the FT and Corporate Knights rankings, there are undoubtedly schools which aren't given the appreciation they may deserve.

But it's a clear step in a direction towards a business school future around sustainability, impact, and responsibility, as opposed to just high paid jobs and promotions. Its influence will no doubt increase the cooperation from participating schools, as schools aspire to increase their rating through the impact they are having.